We are pleased to provide this event for FREE, although you must register to get the link. If you are able to make a donation of any amount while registering, it will help us to keep the music playing. Thank you! 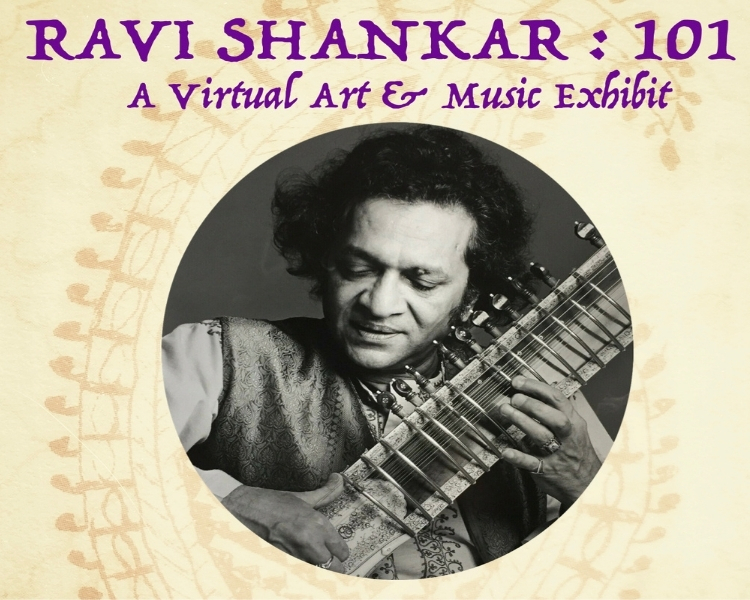 April 7, 2021, would have been the 101st birthday of Ravi Shankar, the legendary sitar pioneer and “Godfather of World Music”. To celebrate this artist’s exceptional career and life, World Music Institute proudly presents a one-of-a-kind art and audio exhibit – Ravi Shankar: 101 – featuring a carefully curated collection of rare concert posters, magazine covers, LP covers, and photographs set to exclusive audio recordings of live performances recorded in 1957 and 1967. It also features excerpts of a rare 1968 interview with the artist that has not been heard since its original recording.

All audio is exclusive to this exhibit which is endorsed by the Ravi Shankar Foundation. The collection was curated by WMI Artistic Director, Brian Keigher.

World Music Institute has a long, cherished history and friendship with the late Ravi Shankar, who was an honorary board member and repeatedly presented live starting in 1988. Enjoy an intimate, unique glimpse into this world music icon’s busy life, his popularity, and his vast impact on Western music and pop culture.
Reserve

Hassan Hakmoun began learning Gnawa music after witnessing his first trance ceremony at the young age of four in his homeland of Morocco. He eventually chose the sintir as his main instrument, a three-stringed lute with a body made of camel skin stretched over nutwood. The strings of the sintir are pitched low, enabling the instrument to serve as the bass foundation, much like the Western string bass. Its sweet tone makes it well-suited to carry the melodic line of a composition. By drumming on the body of the instrument, Hakmoun added his own percussive expression while contributing vocals, thereby creating a unique foundation for his musical explorations and growth. By the age of fourteen, he was an established musician performing at Gnawa lila ceremonies with his own ensemble. Hassan has collaborated with a variety of internationally acclaimed artists ranging from Peter Gabriel, Ozomatli, Don Cherry, Kronos Quartet, Dee Dee Bridgewater, and Idan Raichel. Today, Hakmoun is known as the godfather of Gnawa music.

Hakmoun continues to record and perform at major festivals and venues around the globe and conducts master workshops at universities. Most recently, Hakmoun started a project collaborating with dancers to create a new percussive style of Gnawa dance.

In-demand bassist and composer Mike Rivard defies easy categorization and finds himself at home in a bewildering array of musical settings.
From the low-rock of Mark Sandman and Morphine, to trance music in the mountains of Morocco with Amazigh musicians; from Carnegie Hall with the Boston Pops Orchestra, to sitting in with jazz giants Medeski Martin & Wood.