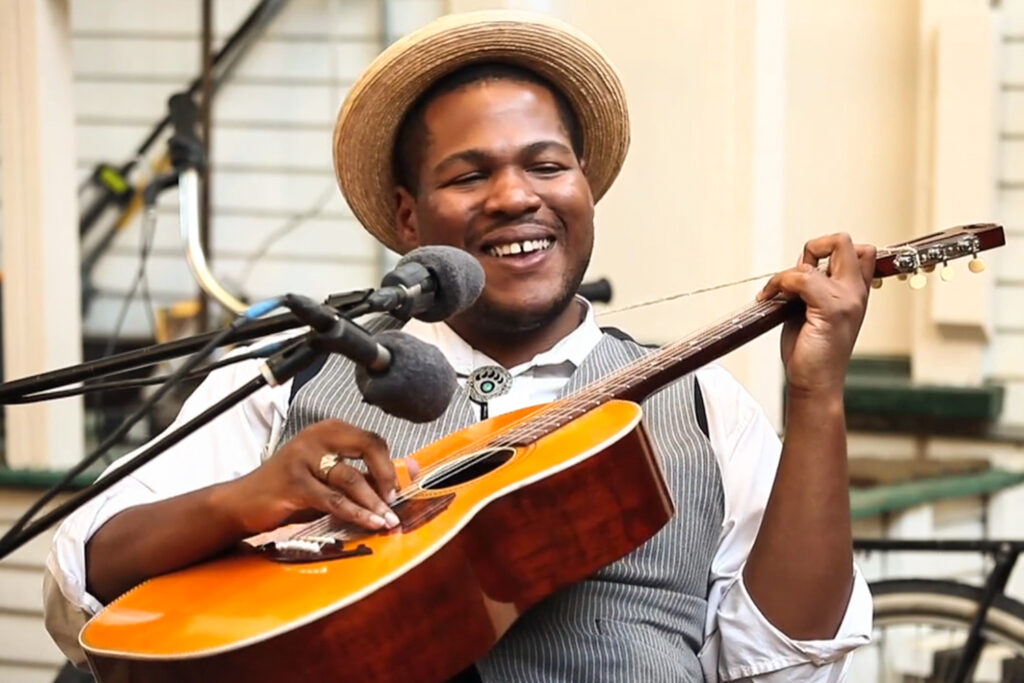 Unlimited on-demand streaming begins on Friday, May 7 at 7 PM EDT.  Once you purchase your tickets, you will receive an access link the day that the streaming window begins and you will have unlimited on-demand access for 72 hours from when you enter the promo code. Closed captioning provided.

Join WMI in celebrating the American Blues with Jerron “Blind Boy” Paxton, an American musician,vocalist, and multi-instrumentalist. Paxton’s style draws from pre-World War II blues and jazz and is influenced by Fats Waller and “Blind” Lemon Jefferson. According to Will Friedwald in The Wall Street Journal, Paxton is “virtually the only music-maker of his generation — playing guitar, banjo, piano and violin, among other implements – to fully assimilate the blues idiom of the 1920s and ’30s, the blues of Bessie Smith and Lonnie Johnson”. Paxton’s talent and contributions to traditional, acoustic blues music have earned him comparisons to contemporary artists such as Taj Mahal, Keb’ Mo’, and Corey Harris. Similar to groups such as the Carolina Chocolate Drops and Our Native Daughters, Paxton is one of the few contemporary African-American banjo players  touring today.

Still in his 30s, Jerron “Blind Boy” Paxton has earned a reputation for transporting audiences back to the 1920’s, making them wish they could stay there for good. Paxton may be one of the greatest multi-instrumentalists of his generation.

Along with Buddy Guy, Eric Burdon, Edgar Winter, Kenny Wayne Shepherd, and others, Jerron performed at a sold-out Lead Belly Tribute at Carnegie Hall on February 4, 2016. It is no exaggeration to say that Paxton made a huge impression. In the two years since his incredible performance at that star-studded show in one of the world’s great concert houses, Paxton’s own star has been rising fast. He opened for Buddy Guy and also Robert Cray, and has performed at numerous other festivals throughout the USA and internationally.

Paxton was featured on CNN’s Great Big Story and appeared in the multi-award-winning music documentary “American Epic” produced by Robert Redford, Jack White & T-Bone Burnett. In 2018,  ‘Blind Boy’ toured the U.S. with the musicians from the groundbreaking music documentary.

The young musician sings and plays banjo, guitar, piano, fiddle, harmonica, Cajun accordion, and the bones (percussion). Paxton has an eerie ability to transform traditional jazz, blues, folk, and country into the here and now, and make it real [I do’;t know what that’s supposed to mean. Maybe instead: Paxton has an ability to bring the spirit of traditional jazz, blues, folk, and country music come to life and  mesmerizes audiences with his humor and storytelling. He’s a world-class talent and a uniquely colorful character who has been on the cover of Living Blues Magazine and the Village Voice, and has been interviewed and featured worldwide. Paxton’s sound is influenced by the likes of Fats Waller and “Blind” Lemon Jefferson. According to Will Friedwald in the Wall Street Journal, Paxton is “virtually the only music-maker of his generation—playing guitar, banjo, piano and violin, among other implements—to fully assimilate the blues idiom of the 1920s and ‘30s.”