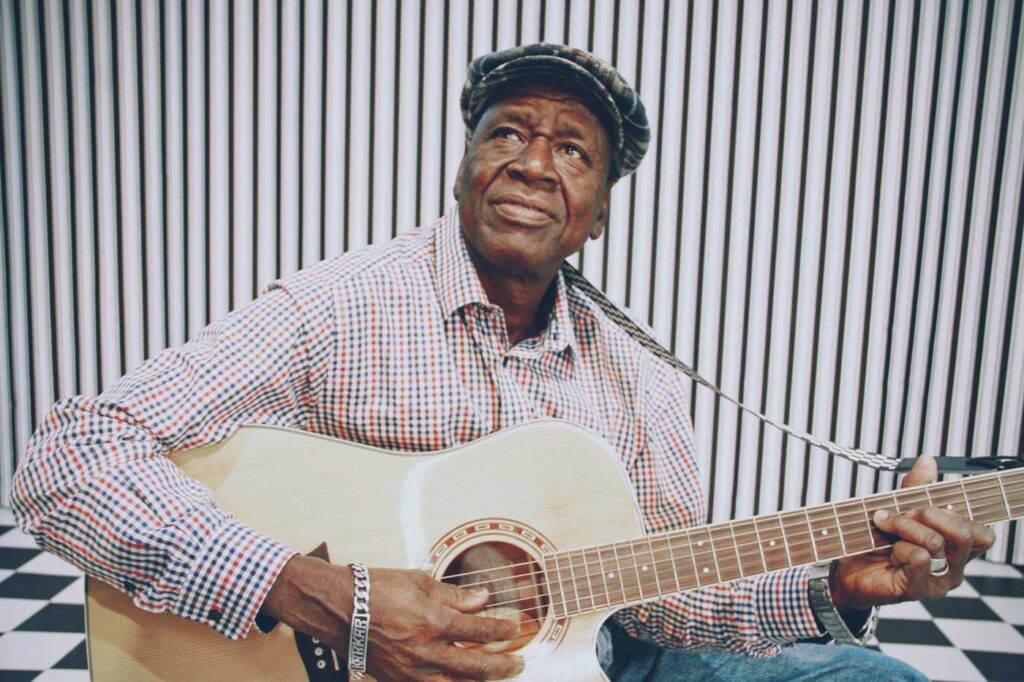 On-demand streaming available now. Once you rent, you will have unlimited access for 72 hours from when you enter the promo code. Closed captioning provided.

Don’t miss iconic Malian composer, guitarist and troubadour Boubacar Traoré in his first virtual concert, recorded in Bamako, Mali, exclusively for WMI. At 79, the legendary self- taught blues guitarist has been a towering figure in Desert Blues music over the last six decades.

Traoré’s live music performances on the radio throughout the 1960’s were anthems for a newly independent country and made him a musical superstar at home, but it wasn’t until his 1990 debut album “Mariama” that he received worldwide acclaim, and he has been captivating fans all over the world ever since.

Boubacar Traoré carries within him all the beauty of African blues. A diamond among the jewels of Mandingo music, he shines with the dark glow of exceptional purity. Only the voice of “Kar Kar” (a footballing nickname meaning “The Dribbler” given to Boubacar by his friends) can blend Niger and Mississippi river alluvia with such moving authenticity. His unique, inimitable, self-taught guitar technique owes a great deal to his kora influences, but its shades and phrasing also suggest the great black bluesmen of the deep South: Blind Willie McTell, Robert Johnson, Muddy Waters and others.

Back in the 60s when the euphoria of African independence reigned, the 20-year-old Boubacar Traoré was Mali’s Chuck Berry and Elvis Presley. He was the first to play Mandingo-based music on electric guitar, long before his junior and friend, Ali Farka Touré. In those days, Malians would wake to the sound of Boubacar’s poignant voice and saturated riffs. Hits including “Mali Twist” (Children of independent Mali, we must stand on our feet / Let all the young people return to their homeland / We must build the country together) and “Kayeba” provided dance music for a generation who were enjoying freedom for the first time. But then the celebrations and lyrical illusions ended in November of 1968 in Mali when Modibo Keita’s socialist government was overthrown by a military coup. Kar Kar and his songs were exiled from the airwaves. Returning penniless to Kayes, his hometown in the Kassonké region (to the northeast of Bamako near the Senegalese border), Boubacar became a farm worker, opened a shop with his elder brother – the one who had introduced him to the guitar and given him his first one – and worked to feed his family.

His music was rediscovered in 1987 when reporters from Malian national television visited Kayes. “Kar, you have to come to Bamako. You’ve never been seen on television since it began. Everyone should realise you’re not dead, you’re alive…” It was a renaissance for the artist. “People were amazed to see me. Most of them had only heard me on the radio,” he said at the time.

Boubacar Traoré is a discreet, exceptional artist and is respected and acclaimed in Mali and beyond, especially by young people. They are constantly rediscovering the artist, who is one of the founding fathers and great ambassadors of modern Mandingo music.